A naturally occurring hormone, testosterone is one of the most important components of a man’s physical makeup. Having Low Testosterone is responsible for low sperm count and it also hinders a man’s sex drive. The hormone is also helps to build bone and muscle mass.

As men age, however, the production of testosterone naturally starts to decline. As testosterone levels decline, certain signs and symptoms can arise. 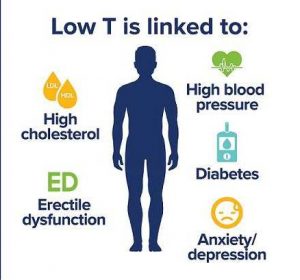 Concerned that your testosterone levels are dropping? Here’s a look at the top three signs that indicate you aren’t producing as much of this vital hormone as you once were.

If you have been feeling less and less like having sexual intercourse, then chances are that you are suffering from a lowered production of testosterone. One of the main functions of this hormone is to create the urge to have sex. If you aren’t feeling like having sex, then you probably aren’t producing enough testosterone.

When you take a shower, do you see a large collection of hair in the drain? When you comb your hair, do you find a lot of it coming out? If so, then you could be suffering from lowered testosterone production. Testosterone plays an important role in several bodily functions, including hair growth. While baling is often associated with aging, it can also be associated with lowered testosterone production. This is particularly true if you are experiencing loss of hair on the body and face.